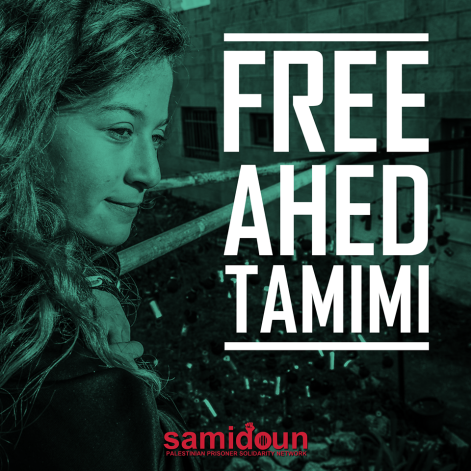 EDIT #2 12/20/17: While information is slow coming out, it is now known that Aheds father, Bassem Tamimi, has also been arrested.

EDIT #1 12/19/17: At midnight, a few minutes after publishing, it was reported that Ahed’s cousin Nour Tamimi, a 21-year old journalist, was just abducted by Israeli occupation forces.

On Tuesday, December 19th, 2017 at 4 AM EEST 16-year old Ahed Tamimi, youth leader and daughter of activists Nariman and Bassem Tamimi, was abducted from her home in Nabi Saleh in the West Bank during a pre-dawn raid carried out by Israeli Occupation Forces. According to Bassem, at least 30 soldiers were involved in the raid and Ahed’s arrest. During the raid, occupation forces assaulted multiple members of the Tamimi family, including Nariman and Ahed’s 14-year old brother, and confiscated their cell phones and computers. Later in the day, after learning that Ahed was being held at a police station near Jabaa village, Nariman traveled there to be present for her daughter’s interrogation, only to be arrested by occupation forces upon arrival.

Tuesday’s raid and Ahed and Nariman’s arrests follow on the heels of Ahed’s 14-year-old cousin, Mohammad, being shot in the face with a rubber bullet by IOF on Friday during a protest in Nabi Saleh. Mohammad was put in a medically induced coma for 72 hours and remains in critical condition. A video posted on Facebook by Bassem Tamimi on Friday shows Ahed and Nariman blocking two israeli soldiers from entering their home after occupation forces had just shot Mohammad in the face and fired tear-gas canisters directly at their home, breaking several windows.
The Tamimi family is no stranger to brutal Zionist oppression, as family members have been regularly harassed, detained, beaten, and shot by IOF countless times over the years, targeted for their leading role in organizing weekly protests in the village of Nabi Saleh to demand the end of Israeli encroachment on their lands. According to members of the Tamimi family, Nabi Saleh has been raided on a near nightly basis for the past three months. Bassem, Ahed’s father, has been detained at least 11 times by Israeli authorities and has spent over three years in administrative detention without charge or trial. Israel uses administrative detention to incarcerate Palestinians indefinitely and without ever revealing what the allegations are. Under administrative detention, Palestinians can be detained and re-detained indefinitely, a method used to neutralize political action. There are currently over 450 Palestinians in Administrative detention. Mass incarceration of indigenous peoples is a consistent strategy in the toolbox of colonizers, practiced to neutralize effective political actors and normalize the abduction and torture of sisters, mothers, brothers, fathers, children and comrades. However, history has shown that Palestinians and nationally oppressed have resisted this formula and created their own: one that demands resistance in all its forms in the face of repression.

In the words of Bassem,

“We have no choice but to resist. But because we resist, we pay the price.”

Ahed is one of 311 Palestinian child prisoners in Israeli jails as of November 2017. Israeli Occupation Forces regularly abduct, arrest, and abuse Palestinian children and torture them while in custody. On the evening of December 10, 17-year-old Abd al-Khaliq Burnat, son of activist Iyad Burnat, and two of his friends, Hamzah Al-Khatib and Malik Radhiwas, were abducted by occupation forces while they were out getting pizza. And just days prior on December 7, a photo of 16-year-old Fawzi al-Junaidi went viral in which he is seen blindfolded and handcuffed, surrounded by nearly twenty occupation forces. He now faces charges of throwing stones at israeli soldiers in military court. These are just some of the 450+ Palestinians, over 130 of them children, who have been abducted by Israeli forces since the US administration under Trump recognized Palestinian Al-Quds (Jerusalem) as the capital of the settler-colonial occupier state of Israel. This symbolic assault on Palestinian sovereignty has validated and further emboldened the Zionist entity to continue their unchecked hostility towards Palestinians.
The arrest of Ahed Tamimi is not an isolated incident, but rather follows suit with Israel’s policies and increased attacks on Palestinians since Trump’s announcement on Jerusalem. As Palestinians continue to mobilize in light of this decision, and for all issues that occur as a result of it, it is imperative that the international community condemns all efforts by Israel to stifle Palestinian resistance. Israel’s attempts to silence and instill fear in Palestinian youth, must be met with outrage, while extending full support to targeted Palestinians so they are not demoralized.

We stand against the imprisonment of all Palestinians, especially Palestinain children. We believe all occupied people have a right to resist their occupation by all means necessary. We stand by the Tamimi family in this difficult time and salute their struggle in their firm resistance against Zionist aggression.
#FreeAhedTamimi #HandsOffJerusalem #Right2Resist

A Call For Action:

We are calling for individuals and groups to show solidarity by signing onto this statement and distributing it amongst your networks. You can sign on by filling out this google form. We are also calling for: